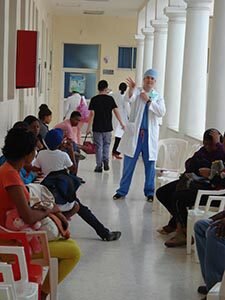 It was Monday afternoon and the first day of operations for the trip. I spent what seemed like hours throwing a baseball back and forth with a little boy with  severe burn scars on the majority of his body awaiting surgery to correct his  feet to help him walk better. Every time he threw the ball, the look on his face  looked as if it was the first time he threw a baseball. He seemed to not pay any attention to the fact that he was just minutes away from surgery. After his surgery, I checked in on him frequently in post-op to make sure he was  recovering well. I was not present when he was released to go back home that day  and I thought about him for for the next 4 days, wondering on how he was  recovering from his surgery and if he was throwing the baseball with someone  else while he was recovering to pass time.

Four days had flown by and as soon as we knew it the trip was wrapping up and it  was time for clinic. The day was filled with smiling faces from patients and as  well as from all that were present in the room. Smiling at the children that  were making them laugh, smiling at children walking into clinic wearing Kansas  City Royals hats, and smiling because the week was coming to an end and the  collective hard work of many people was coming to an end. As the clinic day came  to a close and grateful families came and went, there were a few children that  stood out that I will never forget. Their selflessness and determination  combined with their extremely positive outlook on life really made you think of  what an impact these medical mission trips are making on countless lives year  after year, for the past 31 years.

As clinic was wrapping up, I was able to find the little boy with severe burns  that I was playing catch with days before. He was on his little crutches with  his Kansas City Royals hat on, making a bee line straight towards one of the  Peace Corps volunteers, Jim, at the exit door. He turned around and asked his  mom to get a book out of his backpack for him to show Jim something. Out she  pulled a coloring book and gave it to the little boy. He stood at the exit door,  leaning on his crutches showing Jim his work he had done in his kitten coloring  book while he was recovering. He made it a point that he had to show Jim his  kitten coloring book before he had left. It was one of the greatest experiences  to witness in person from the beginning to the end, because it was such a brief  and sincere moment that one could have missed if they didn’t stand there and  watch.

Years from now, whenever I think back upon my first MACLA Dominican Republic  trip, I will forever think of that little boy leaning on his crutches at the  exit of the room, very proudly showing off his kitten coloring book.

Choose Your Best Self

When you commit to your beauty journey, you are choosing to take how the world sees you into your own hands. That’s an empowering feeling. Dr. Quinn and his team at Quinn Plastic Surgery and Aesthetic Center are here to honor that commitment and help you achieve the best results for you and your body. These are your decisions. Our role is to help you make the most of them. Schedule a consultation today to get started on your beauty journey.